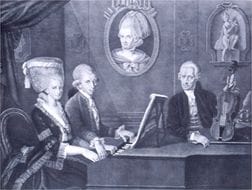 On modern piano keyboards, the seven "natural" notes of each octave are the white keys and the five half-tones are black keys in between. But, on pianos dating from the 18th century when Mozart was alive, the colors of the keys was exactly reversed: the white keys were black and the black keys were white. This was true not only for pianos, but also for the keyboards of organs and cembalos of the time. They were the opposite of the white/black arrangement that predominates today. However, when pianos became the dominant keyboard instrument in the 19th century, somewhere along the line, the positional relationship between black and white switched.

Why this happened is not well understood, but because visually, the color white stands out while the color black recedes into the background, the reason is said to be because making the half-tone keys that stick out black presents an image of stability to the eye. Also, it is said that as pianos became more widely used, a brighter keyboard was simply more preferable.