“I really fell in love with my STORIA guitar…I focus mostly on singing, so I needed a guitar that was easy for me to play live, that sounded amazing, and looked great on stage.”

Singer-songwriter Alli Walker grew up in Prince Edward Island, Canada, playing piano, drums, and bagpipes. A self-confessed “tomboy” who took great pleasure in beating the boys in drum battles, Alli later discovered Avril Lavigne and Taylor Swift: two strong female artists who inspired her to pick up and play the guitar in a typically “all-boys club.”

A recent addition to the Yamaha Guitars family playing a STORIA I guitar, we talked to Alli about her journey as a musician, her ‘Mindful Music’ and ‘Conscious Country’ initiative, and why her STORIA I is the perfect fit for her.


Hi Alli. Thank you for taking the time to chat with us. How did you first discover your passion for music?

I did not grow up in a musical family at all, but my parents always encouraged me to keep trying things within music until I found what I loved. I started on piano really young, I took drum lessons and was in percussion all through school, I went on to electric and then acoustic guitar, and I also learned the bagpipes.

I think having a foundation in each instrument really made me comfortable later in life being in a band and really understanding each player’s role.

What inspired you to choose the guitar?

In my senior year of high school, I was inspired by this new singer named Taylor Swift. Here was this girl the same age as me, having the courage to get up on stages and play guitar and sing on her own, with no band. She wasn’t the best at the beginning but that is what made her unique, she wasn’t afraid to not be perfect, she wasn’t afraid to be herself. I learned all of her songs on guitar because they were very easy and started writing my own songs using those same chords. She really inspired me because we were the same age, looked similar, and I thought if she can do it, so can I! And the rest is history, I spent the next 13 years getting to where I am now, ready to take on the world!

I also loved Avril Lavigne. She was also a rock star woman who wasn’t afraid to be unique in an all-boys club. She was who inspired me to play electric guitar.

What's the story of your first guitar?

My first guitar was a black Epiphone. I think my Dad bought it off of Kijiji Classifieds and it was most likely a knock off. I didn’t care, I just wanted to rock out with my guy friends, wear my skater shoes, and listen to Sum 41.

I traded in my electric for an acoustic when I realized I could sing along a bit easier with an acoustic, and that I could write songs with cowboy chords. So, I got a maroon acoustic guitar, which is now hanging on my wall signed by Taylor Swift. Although you can’t see the signature anymore because my arm rubbed it off from strumming!

From a beginner to today – what was your learning journey like?

I started on an electric guitar just learning from my guy friends, never really learning chords, just playing around with licks and solos. When I got an acoustic, I took group lessons with a few other girls my age from a gentleman in my city who was known for being in a country band. It was perfect because he would teach us the opening hook, how to go into chords, timing, and we learned relevant songs we could sing along to.

I moved to Toronto when I was 19, met my now husband who is a drummer, and we formed a cover band. So, for the next nine or so years, we were performing at bars, corporate events, weddings, everywhere, and usually three hours sets. So, I got to learn lots of songs on the guitar!

You’re currently playing a Yamaha STORIA I, can you tell us about your relationship with this guitar?

I really fell in love with my STORIA guitar. It has such a full sound for a smaller guitar, and I like the width and the length of the neck. I am no Jimi Hendrix. I focus mostly on singing, so I needed a guitar that was easy for me to play live, that sounded amazing, and looked great on stage! It allows me to play positions that are a bit more difficult on a larger guitar, with much more ease. I actually featured this guitar on the cover of my debut album The Basement Sessions: What I’ve Learned So Far because it’s so beautiful!

Tell us about the album, what’s behind these songs?

Each song on this album really is a lesson I’ve learned so far. I came up with ‘Mindful Music’ and ‘Conscious Country’ while in a Float Spa Meditation session, thinking how I can put life’s discoveries and lessons into music. So, I started writing about what I was going through, and it was so natural, instead of the previous music I was writing which was very forced and trying to fit into a certain box.

I decided to put out one song every month with a video, for ten months, and at the end compiled it into a CD which was released in September 13th, 2019. I’ve never been prouder of something. I made a schedule, stuck to it, wrote the entire album myself, made all of the music videos myself with my husband, who also produced the whole album, so it is a very personal project that I am extremely proud of. 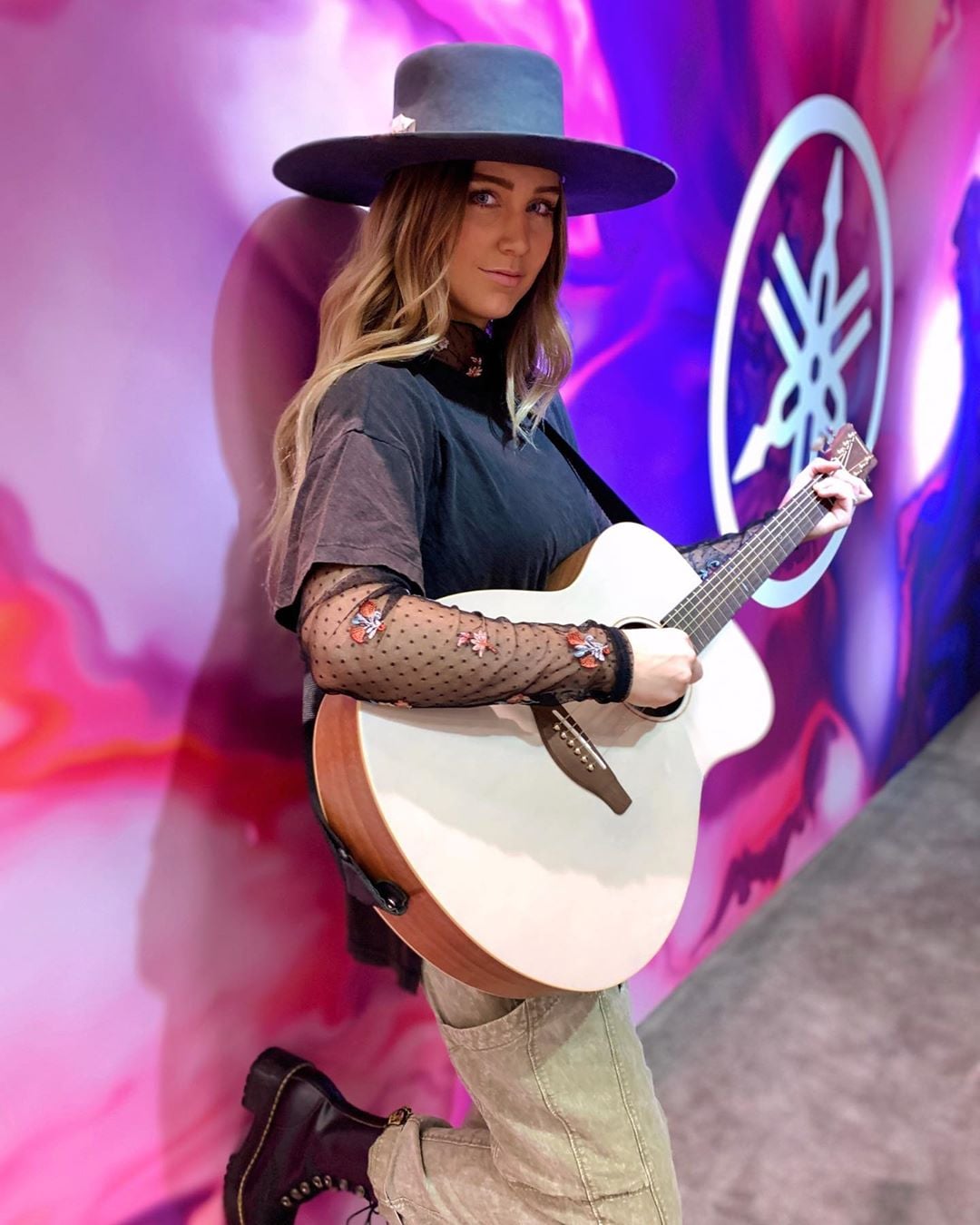 You use your music and social media presence for good, promoting mindfulness and encouraging discussion on mental health. Can you tell us about your ‘Mindful Music’ and ‘Conscious Country’ message?

I spent ten years developing my craft, performing anywhere and everywhere, writing as much as I could, practicing guitar, taking vocal lessons, traveling to Nashville to collaborate, and really discovering who I was as an artist and what I wanted to say. Through this discovery I had a lot of ups and downs, wondering what my purpose was within music, how I could stand out, and how to take care of my mental health while being a musician and being in my 20’s with all of the social media and comparison.

Through being vulnerable with my social media and audience, I discovered and started releasing what I call ‘Mindful Music’ and ‘Conscious Country’. Music about mental health, empowering messages, and the lessons that I’ve learned on my journey. I want to be that voice for those who feel alone with their struggles, as I did for so long. A lot of people heal through music, and I wanted to make music that made you think and made you take a moment for yourself and your personal development.

I spent many years writing songs about boys, booze, and breakups, trying to fit into that radio-friendly country box. But it wasn’t me. I am happily married and don’t drink, so I didn’t have any relation to those topics. So, I started writing about what I was going through, and for me that was the harshness of comparison, my journey to self-love, anxiety, going for my dreams amidst adversity, and just taking care of my mental health in general.

I dealt with anxiety my whole life, which translated into performance anxiety. It’s taken me years to build up my tool belt to get on that stage without getting sick beforehand. I also dealt with really bad acne for a long time, which made me hate my reflection and what I looked like. It wasn’t going away, so I had to learn to love myself despite my appearance. Going on all these self-discovery journeys really gave me a lot to work with when it came to deep diving into my feelings, translating them into lyrics, and being able to relate with my audience.

Who knew just being yourself and sharing your journey could turn into your purpose? It feels good not to be putting on a facade or trying to be someone I’m not. When I get messages from people sharing their journey and how my music has helped them along the way, it really makes it all worth it.

What can we look forward to next?

I just released the physical signed copy of the album on my website, which came from fans actually asking for it as I didn’t have the intention to print CD’s as I didn’t think people bought them anymore, but they are selling like hotcakes! It’s also really cool to have a physical piece of something you’ve worked so hard on!

In the new year, I have my music video for “Little Things” coming out, then it’s back to Nashville in February to start writing and recording for the releases in 2020! I am really looking forward to the future and building a team around me who believes in this Mindful Music! 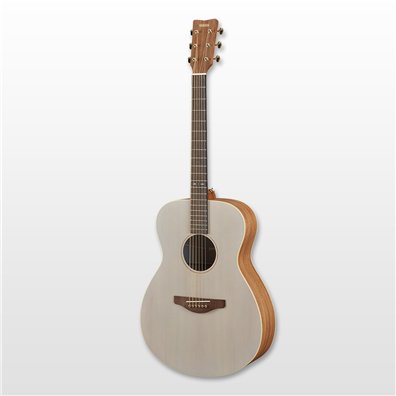 Invite music into your life with the stylish and inspiring STORIA series – guitars that reflect your personal style and invite creativity at a glance.