Medellín, Colombia―Yamaha Corporation announces the launch of the I'm a HERO Program for children in Colombia. The program exposes children to the joy of performing music, and also to significant challenges, in order to help children discover within themselves the strength to face invisible barriers in their lives. The “I'm a HERO Program” marks the 110th anniversary of amicable relations between Japan and the Republic of Colombia (hereinafter, “Colombia”). 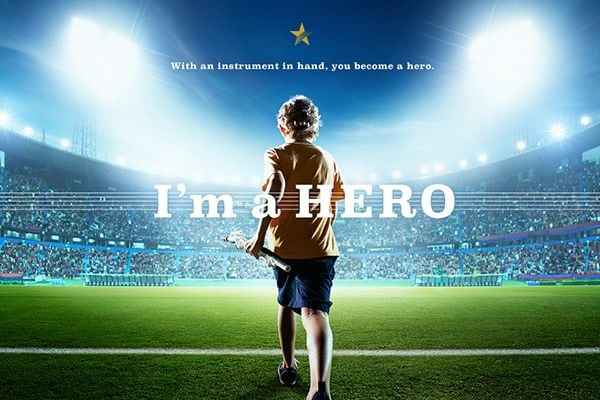 The I'm a HERO Program encourages children to take center stage in overcoming the invisible barriers of inequality and poverty, as well to combat the discrimination, prejudice, and other disadvantages that these problems cause.

26 young participants will join top Colombian football club players as they take the field on Sunday, September 30 (Colombia time) at a match in the Categoría Primera A, Colombia's premier football league. The children will perform the Colombian national anthem on their newly acquired Venova™ wind instruments in front of a huge crowd, displaying the abilities that are the results of their own efforts for all to see, and demonstrating that they are heroes that face and overcome adversity.

A documentary scheduled for release in end-October will illustrate the progress of the children from selection for participation in the program, through to taking to the stage and becoming heroes.

*Kids will play the national anthem before the kickoff

Performance of the national anthem before kickoff

*2: A multi-purpose stadium in Medellín, Colombia.

Solving social problems with the power of music

Throughout the world, children face invisible barriers that limit their futures—inequality and poverty, as well as the discrimination, prejudice and other disadvantages that these problems cause. A movement to counter these social problems with the power of music is underway in Latin America, and the Latin American Youth Orchestra and Band is a part of that movement.

The youth orchestra has its beginnings in a government-backed music education project called El Sistema, which was first introduced in Venezuela. Implemented as a national strategy to prevent delinquency and eradicate poverty, El Sistema aims to promote society-wide stability by engaging children in musical activities and securing future employment opportunities for them. Yamaha supports these efforts, and for the last 15 years has contributed by promulgating instrument maintenance techniques and training instrument repair technicians.

In Colombia, youth orchestras and bands were launched in Medellín (Red de Escuelas de Música de Medellín) and Bogotá (Fundación Nacional Batuta), for example. Yamaha also played a hand in the creation of a scholarship program called ToKANDO, which is run by Fundación Incolmotos Yamaha, a major partner of ours in Latin America.

New challenges have also appeared. One major problem is a lack of awareness of the importance of and methods used for instrument maintenance, exacerbated by the fact that there are few people who are able to repair broken instruments. To address this problem, we launched the AMIGO Project in 2014, offering workshops to enable people to maintain instruments on their own, and promoting the training of technicians who can repair broken instruments.

Scenes in Medellín, Colombia where some of the kids in this program are living

Taking the field with football heroes, instruments in hand

Our work on these projects drove our decision to launch the I'm a HERO Program in Colombia. This year is also the auspicious 110th year of amicable relations between Japan and Colombia.

Under this program, 26 children from the Red de Escuelas de Música de Medellín and ToKANDO initiatives will be invited to perform on the big stage with the Venova, a new wind instrument.

These children have no prior experience with wind instruments other than the recorder, so in preparation for this event they have spent about six months learning to play the new Venova under their respective instructors. On Sunday, September 30, they will join the players of Colombian football club Atlético Nacional as they take the field for a “Categoría Primera A” match in the Colombian Premier Football League. The children will perform the national anthem in front of a large crowd with the accompaniment of Banda Sinfónica de Copacabana a Colombian youth band.

Football is extremely popular in Colombia, a football powerhouse that competed in the World Cup in June. Children are particularly awestruck by the players of Atlético Nacional, a famous Medellín-based club that has won the Colombian national league championship 16 times, including last year.

Through music and their own efforts, these children will overcome invisible barriers to take their place on the big stage, becoming heroes on the day of the big match.

Venova™: A new wind instrument that is sturdy and easy to maintain 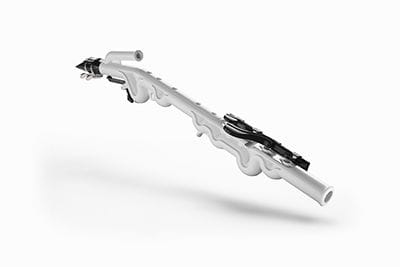 *Venova is a trademark or a registered trademark of Yamaha Corporation.

*Other product names, company names, etc. in the text are trademarks or registered trademarks of Yamaha or the respective companies.