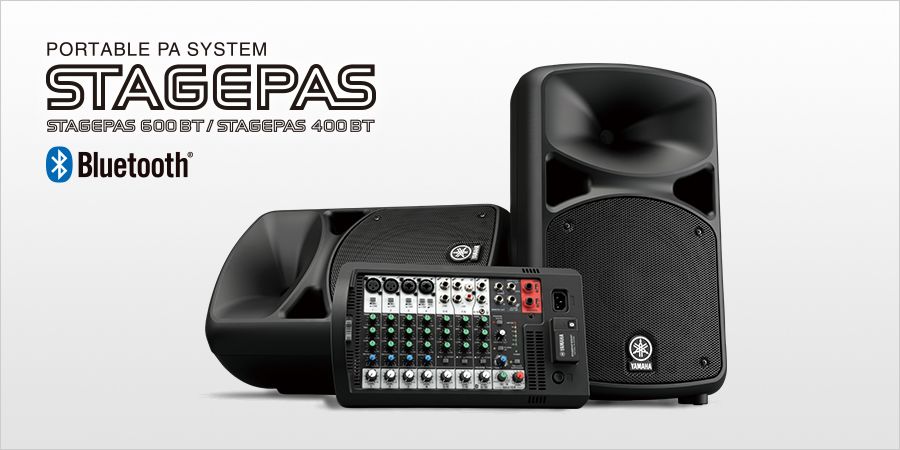 These updated versions are the successors of the STAGEPAS 400i and 600i which have sold over 400 thousand units worldwide after garnering a reputation as a very compact, yet high-powered, portable all-in-one sound system with exceptional sound quality. With the addition of Bluetooth audio streaming to the high-efficiency amplifiers and speakers, Yamaha's state-of-the-art DSP, and comprehensive suite of onboard features, the new STAGEPAS will expand the system's already versatile capabilities for a broad spectrum of use cases.

Both the 400BT and 600BT feature two sleek, lightweight speakers and a detachable powered mixer, along with one pair of speaker cables and a power cord, giving users a complete, portable sound solution that can be set up quickly and easily in a variety of configurations and environments. The new Bluetooth feature allows users to remotely stream audio from up to 10m away from the amp/ mixer unit, giving musicians, public speakers, or instructors instant access to musical accompaniment, background music, sound effects, or any other audio they choose from their music library.

Featuring an updated knob design that improves visibility for mixing and console management in low-light situations, the detachable mixer features simple, intuitive controls that deliver high-quality sound in a matter of seconds. One knob provides access to four different high-resolution SPX reverbs while Yamaha's 1-knob Master EQ™ offers optimized settings to match the sound with its environment via a single control. Even the onboard feedback suppressor allows users to remove unwanted feedback with the touch of a single button.

"Ever since its release in 2005 the STAGEPAS has been a staple of live music performances, events, and public speaking or instruction applications for audio engineering beginners or musicians that prefer to set up their own sound.” remarked Yoshi Tsugawa General Manager of Yamaha Pro Audio Division. "With the addition of wireless audio playback via the new Bluetooth audio streaming feature, it is our hope that the additional flexibility and freedom will inspire more creative usage and success with our best STAGEPAS yet.”

The new STAGEPAS 400BT and 600BT are the successors of the STAGEPAS 400i and 600i portable PA systems. Equipped with a Bluetooth wireless audio function the new STAGEPAS-BT adds even more flexibility to your portable sound reinforcement.