Yamaha's RemoteLive™ Technology and Disklavier™ Used to Present Elton John Live Streaming
-From Anaheim, California to 11 Countries around the World- 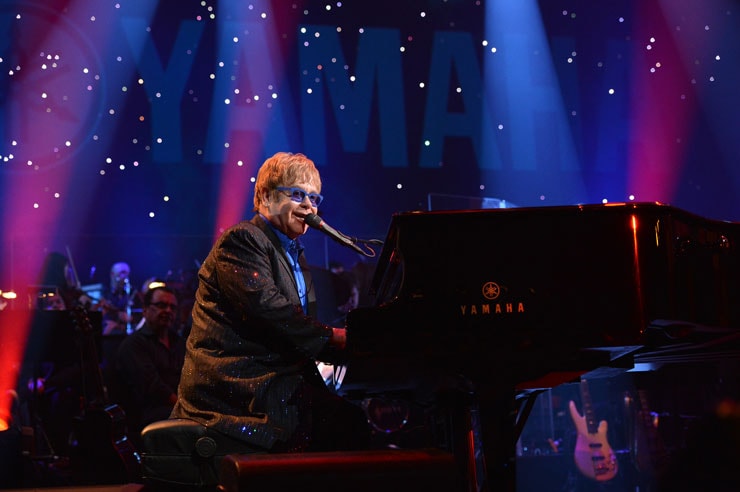 Yamaha has also announced that its U.S. subsidiary, Yamaha Corporation of America, will begin to make available performance streaming services in the United States, such as those provided for the Elton John concert on a commercial basis in April 2013 using its RemoteLive™ technology and Disklavier™.

World-renowned artist Elton John has released 40 albums over a period of 34 years and has received the Grammy Award five times as well as many other awards. Today, he is admired and taken as a model by many musicians. He was knighted by Her Majesty the Queen in 1998, becoming Sir Elton John, and has worked together with many big names in the musical profession. Since 1990, proceeds from his recordings have been used to fund AIDS research in the United Kingdom and since 1992 in the United States. Even today, he has an active tour schedule and supports many humanitarian activities. Elton and Yamaha have a long history of cooperation, and this relationship led to his recent performance in Yamaha's 125th anniversary concert and its live streaming to countries around the world.

Since its founding in 1887, the Yamaha Group has developed its business activities focusing on musical instruments, audio products, Yamaha music schools, and other products and services related to sound and music. We are pleased, indeed, that Yamaha touches on the lives of and brings joy to so many people around the world.