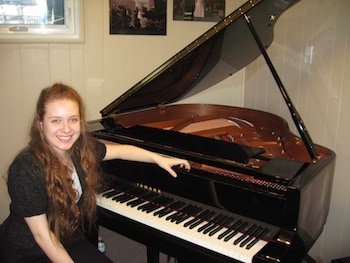 If young pianist Anastasia Rizikov wasn’t so clever, brilliant and full of gratitude to her supporters, one just might be able to convince her that pianos grow in driveways and basements. She certainly wasn’t expecting—not even for Christmas or her fourteenth birthday last December—to receive a Yamaha C1X grand piano from The Glenn Gould Foundation with the help of Yamaha Canada Music Ltd.

In honour of Glenn Gould's 80th Anniversary Year and his Grammy Lifetime Achievement Award, The Glenn Gould Foundation has provided the piano to Anastasia on an indefinite loan-basis to aid in her artistic and career development.  The gift was revealed to Anastasia at The Glenn Gould Foundation office in December with her mother Liana Rizikov and teacher and grandmother, Maia Spis.  Before Christmas, the grand was installed and ready for use.

“I had an amazing month,” said Anastasia later in January at her grandmother’s basement studio, where the polished C1X shines in the corner adjacent to Maia’s concert upright.  “I’m always looking forward to December because there are all these celebrations like Christmas and New Years and my birthday.  Then suddenly I have a gift that is for all 14 of my birthdays, all 14 of the New Years that I’ve celebrated and all 14 of the Christmases.  It’s the gift that I’ve received.”

“We all had no words….it’s very touching,” recounted Liana, who had the challenging task of keeping the piano a secret from Anastasia.  “She puts her nose everywhere,” Liana teased with her daughter nodding in wily agreement.

The close relationship between the trio is obvious as they chat on the couch.  There are whispers and giggles amid a vibrant conversation in which they are each sharing stories and thoughts, often simultaneously.  But amid the humour and cheer, it’s obvious that Anastasia’s career ambitions are serious business.  Maia is dutifully engaged in Anastasia’s musical development, dedicating almost her entire studio to her granddaughter’s exclusive study.  Liana is the home school facilitator and temporary artist manager, in addition, of course, to the job of parenting a precocious teenager.

As part of the budding artist’s career development, the Yamaha C1X will now serve Anastasia faithfully as she makes her way through the international concert circuit.

“She can’t live without the stage.  She loves to perform,” said Maia.

Anastasia made her solo debut at age five and a half at a Ukrainian Church in Scarborough.  As her talent emerged, so did her desire for the stage.  She made her orchestral debut at age seven with the National Philharmonic Symphony Orchestra of Ukraine and since then, has performed at over 30 festivals, competitions, major solo concerts and in guest performances.  Other highlights also include the Canadian Music Competition, first place at the Third Canadian Chopin Competition, a recent guest feature with Sinfonia Toronto and a brief debut with the Toronto Symphony Orchestra under Shalom Bard.  Her engagements have also taken her to Moscow, Russia and Mallorca, Spain.

“When she was small and had a performance, she was so excited,” said Liana.  “It was like how other kids feel when they go to Wonderland."

One gets the sense that Anastasia is always in a kind of wonderland when studying and performing.  She is an ebullient, confident and engaged teenager who voraciously seeks out new pieces to learn and share with audiences.  When asked what happens now with the C1X at her disposal, Anastasia’s answer was candid and immediate.

The new piano is indeed challenging her.  “The heavier keys are very good for practicing and producing sound.  I wasn’t expecting the [C1X] to be such a perfect piano.  The colour is so bright. I feel that this piano has opened up a whole new level of practice and craft.  New possibilities.” 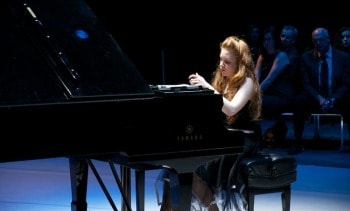 “This is the perfect instrument for her to practice on because she will get better with this quality of instrument,” added Liana.  “We could never afford such an instrument until many years from now, maybe.  If she would become a known pianist, she would probably then buy herself an instrument,” said Liana.

But The Glenn Gould Foundation and Yamaha Canada Music Ltd. intervened much sooner, bestowing the gift within months of first hearing Anastasia play from online videos and live at the Glenn Gould Studio last November.

“We find Anastasia to be a young artist of exceptional promise, tremendous musicianship and even at a young age, in possession of a distinctive musical voice,” said Brian Levine, Executive Director of the Foundation.  “When we learned she didn’t have regular access to a grand piano for study and rehearsal, it seemed obvious we could help in this situation.  Glenn Gould benefitted from an enormous amount of support from his community as a young artist.  The Foundation believes it’s appropriate on special occasions to identify artists of unique gifts and help advance their career and artistic development.”

Goodwill, alongside hard work, tireless family support and a little serendipity has graced Anastasia’s musical journey thus far.  Much like her new piano, the arrival of her first instrument was most unexpected.  When Anastasia’s talents were confirmed in those early years, she needed more than a five-octave keyboard at home.

“My mom told me, you need to get a piano for her.  It was hard; I couldn’t [afford to] buy her one,” said Liana.  Soon afterwards, when driving through their Scarborough neighbourhood, Liana spotted an upright in a driveway and suspected it was for garbage collection.  “Did you ever see a piano on the street in Toronto?” Liana exclaimed at the sheer absurdity of the memory alone.  She approached the homeowners who happily let the Rizikovs test it out and take it away, paying only for the moving costs.

“It was a sign from above,” said Liana.  “Anastasia got a piano from nowhere.  Now she has another amazing piano story.”