Hamamatsu, Japan - On October 12, 2012 (Friday), Yamaha Corporation will make a worldwide launch of a new series of acoustic grand pianos, the CX Series, which will replace its premium quality "C Series" pianos. The CX Series includes six models, ranging from the entry-level C1X to the top-of-the-line C7X, which is intended for advanced artists. This new series has been characterized as "pianos that truly sing," and it inherits many qualities from the CFX Concert Grand Piano.

Outline of the Series

The year 2012 will mark the 125th anniversary of Yamaha's operations, founded under the leadership of Torakusu Yamaha in 1887. It will also mark the 110th year since Yamaha began to manufacture grand pianos.

Yamaha manufactures a broad selection of piano models ranging from the CFX full-sized concert grand piano that is intended for large concert halls and other venues to smaller-sized models more suited to amateur pianists (See below).

At the Kakegawa piano factory, Yamaha combines the strengths of the latest technologies with traditional crafting skills to manufacture the models in this new series. At the same time, Yamaha conducts constant research and development pursuing their goal of creating pianos that are not only mechanically perfect but also superb, top-quality musical instruments.

The new CX Series is an improvement on the very successful C Series, which was launched in 1967. Yamaha has fully drawn on the technology developed for creating the CFX (introduced in 2010), and these models incorporate Yamaha's expertise in sound craftsmanship. The C3X and higher models in the series are equipped with soundboards based on the soundboard technology of the CFX, and to project a richer resonance, the design of the back posts has also been changed. To pursue further expressiveness, they have also improved the music wires and hammers.

The sleek, yet sophisticated external design of the CX Series also was influenced by the appearance of the CFX.

Principal Features of the CX Series

The CX Series inherits the legacy of "pianos that truly sing" that Yamaha pursued when developing the CFX. Just as the sounds made by a great singer reverberate throughout his or her body, so do the rich resonances that are projected when the vibration of the strings is transmitted to the soundboard. And added to this is an unparalleled ability for changing musical nuances, which gives the CX Series pianos outstanding expressivity.

Soundboard structure
of the CX Series

The soundboards of the CX Series (C3X and higher models) are made using the same technology that was developed for the CFX. They have been designed to be rich in resonance, while providing an unprecedentedly sensitive response, long sustain, and ample tonal projection.

The dimensions of the back frame of the piano, where the entire tensile force of the piano comes together, have been made more than 20% thicker than in previous models. This produces wide reverberations with greater resonance over a wide dynamic range with little tonal decay.

4. Changes in Music Wires and Hammers

Music wires made in Europe, which have distinctive sustained overtones, have been used in the CX Series, thus giving these instruments a wide, natural resonance with rich overtones. Also, a grade of similar hammer felts as used in the CFX, which feature a feeling of resilience and an abundant range of tonal colors, has been installed in the CX Series. Even pianissimo tones have long sustain, and a nuanced, expressive sound is possible even when playing fortissimo.

5. Elegant Design Similar to the CFX

The CX Series, like the CFX, adopts modern design that pursues simple beauty.

Yamaha developed and launched its first C Series grand piano model in 1967 with the goal of offering a compact-sized grand that could be placed in the home. The C Series was of the highest quality and also incorporated all Yamaha's piano building expertise acquired during the development of high-level concert grand pianos. They were created by combining the best of manufacturing technology together with skills of experienced artisans. Though there have model changes and offshoots of new models in the C Series, these pianos have been some of the most-popular instruments ever made for much of their 45-year history.

In 2010, Yamaha unveiled their new flagship model full-sized concert grand piano, the CFX, which was created using new design methods. The deep resonance of its tone has been acclaimed around the world, and that same year, the gold prize winner of the International Chopin Piano Competition and the following year the silver medal winner of the International Tchaikovsky Piano Competition both performed on the CFX.

The new models in the CX Series have inherited the remarkable CFX legacy, and you owe it to yourself to test play this series when purchasing a high-quality grand piano. 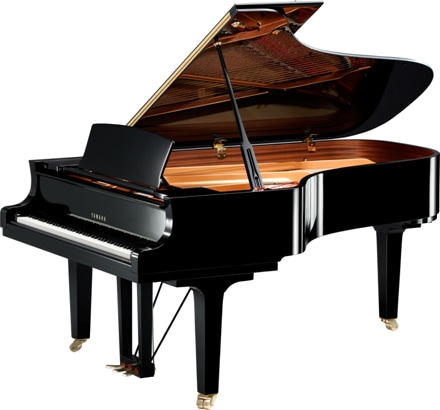