LAS VEGAS (Sept. 29, 2011) – On Sept. 28, 2011, world-renowned singer, songwriter and Yamaha artist Elton John made a triumphant return to The Colosseum at Caesars Palace with his all-new show, “The Million Dollar Piano.” The consummate showman wowed the opening night audience with a spectacular production featuring his most beloved hits. At the centerpiece of the performance is the show’s namesake piano, an engineering marvel constructed of high- grade acrylic and featuring more than 68 LED video screens created by Yamaha. 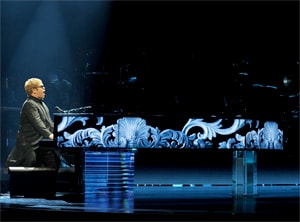 Elton’s return to Caesars Palace marks the beginning of a three-year residency at The Colosseum and his second as a Caesars Palace headliner. He is accompanied by his band, which includes Davey Johnstone on guitar, Bob Birch on bass, John Mahon on percussion, Nigel Olsson on drums and Kim Bullard on keyboards with a special appearance by percussionist Ray Cooper.

Nearly four years in the making, the state-of-the-art piano is the perfect accompaniment to Elton’s greatest hits displaying imagery to complement the entertainer’s fan favorites like “Benny and the Jets,” “Rocket Man,” “Saturday Night” and “Circle of Life.” Creating a whimsical, one-of-a-kind entertainment experience, the piano weighs in at nearly 3,200 pounds and is the brain-child of Elton, music industry veteran Chris Gero, Vice President of Yamaha Entertainment Group, and was designed by 29-year-old Yamaha industrial designer Akie Hinokio.

Completing the show’s design team are Mark Fisher and Patrick Woodroffe. Fisher, best known for his design of Pink Floyd’s “The Wall” and his work designing the opening and closing ceremonies of the 2008 Beijing Olympics, is the mastermind behind the show’s impressive set. Woodroffe conceived and designed the impressive lights display that perfectly augments the set and piano. Woodroffe is best known for his work with the Rolling Stones, Bob Dylan and Depeche Mode as well as his work with Martin Scorsese on the Rolling Stones feature, “Shine A Light.”

In April 2009, Elton completed a highly successful five­year residency at Caesars Palace with the critically acclaimed “The Red Piano.” Originally booked for 75 shows over the course of a three-year run, audience demand for “The Red Piano” was so overwhelming the engagement was extended for a total of 241 shows over a five-year period.

Due to overwhelming demand for the opening of “The Million Dollar Piano,” additional show dates are now on-sale. Tickets for performances in February 2012 are now available and range in price from $55 to $250, not including taxes and fees. Limited VIP tickets are available through the Caesars Palace Box Office.

2012 performance dates now on-sale for “The Million Dollar Piano” include:

For additional show and ticket information, visit CaesarsPalace.com; for the latest updates follow @CaesarsPalace and @ColosseumatCP on Twitter.