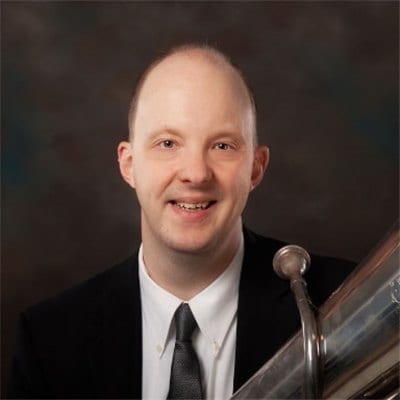 Tom McCaslin has been described by Fanfare Magazine as "one of the contemporary tuba virtuosos". Originally from Regina, Saskatchewan Tom's playing and teaching have taken him around the globe. He has performed and taught in Canada, the United States, Switzerland, Portugal, Finland, New Zealand and Australia.

As a soloist Mr. McCaslin’s solo recordings appear on the Crystal Records and Potenza Music labels. His first solo CD release, “Inside Out”, was met with much critical acclaim. The International Tuba and Euphonium Association journal wrote: “Hopefully this CD will serve to inspire the “next generation” of young tubists who will hear and accept this as regular playing, and strive to push the limits even further.” Gramophone magazine wrote: “lf this recital doesn't convert you to the lyricism of the tuba, nothing will.” Regarding his second CD release, “One More Dance”, Gramophone Magazine wrote: “McCaslin's technical abilities are brilliant and his musicianship is inspiring.” Tom has also recorded for the Canadian Broadcast Company, National Public Radio and performed on Prairie Home Companion with Garrison Keillor. He has performed at numerous International Tuba and Euphonium Conferences and at the United States Army Band Tuba and Euphonium Conference held in Washington, D.C.

Tom McCaslin is a Yamaha Performing Artist and plays exclusively on Yamaha instruments.

When not sitting behind his tuba Tom relishes his time with family, cycling, espresso, and laughing as much as humanly possible.