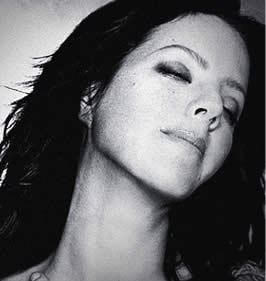 On June 15, 2010, the Grammy Award–winning singer and songwriter Sarah McLachlan will release of Laws of Illusion. This is Sarah’s first studio album of new material in seven years, since the double–platinum Afterglow in 2003, and its twelve songs rank with the most compelling work ever cre¬ated by this gifted artist.

In the years between these two releases, Sarah has married, separated, and is raising two young daughters. These crucial life experiences have en¬riched her artistry and infused her new songs with the full range and complexity of adult emotions. In listening to Laws of Illusion, we can hear the strength of hard–earned independence; the trials of love won, lost, and found anew; and the infinite joys of living.

Because Sarah’s voice is so intimately familiar to so many of us, the experience of Laws of Illusion is a singular and special one. It’s like meeting an old friend again after long separation – and discovering that the passage of time and the accumulation of experience have only deepened rather than diminished that friendship.

For Sarah herself, this period was a time of profound change and renewed discovery. “I think when you go into a dark place for a while and you come out of it, the lightness you feel is…euphoric,” she told an Advocate.com interviewer in May 2010.

“My marriage collapsed a couple of years ago, and it was a long, dark road…Finally coming through that knowing that life is going to be okay, life will go on, and that there’s actually a possibility of love happening again is…just deliriously heady stuff.”

In Laws of Illusion, Sarah looks at love “from both sides now.” The opening track, “Awakenings,” moves on a subdued electronic pulse underpinning ethereal guitar lines and – as the singer soars into her upper register – demonstrates her ability to craft an unforgettable “hook” without hitting the listener over the head with it.

“Loving You Is Easy,” the first single from the album, is an upbeat, almost jaunty piano–based song, with a musical atmosphere perfectly matched to lyrics that describe the heady thrill of new love: “I’m alive and I’m on fire/Shot like a starburst into the sky…”

For many listeners, “Forgiveness” will be the centerpiece of Laws of Illusion. There is a wonderful subtlety in the arrangement, which builds inexorably from unaccompanied vocal–and–piano showcase to the layers of near–ambient guitar parts and finally a powerful coda completed by bass and drums. “Forgiveness,” says Sarah, “is about the loss of a relationship and drawing a line in the sand, saying: This is not good for me and I can’t do it anymore.”

Through the years, we had it all

The midnight whispers, the midday calls

This house of cards, it had to fall

You ask for forgiveness but you’re asking too much

’Cos I’ve sheltered my heart in a place you can’t touch...

Laws of Illusion is produced by Sarah’s long-time creative collaborator Pierre Marchand, and together they co–wrote a number of the compositions. The sole outside number, “Bring On The Wonder,” was written by English singer/songwriter Susan Enan. (In 2008, Sarah was featured on Susan’s recording of this song for the television soundtrack Bones.)

“Pierre and I have worked together for over twenty years,” says Sarah with a trace of awe. “I co-wrote a lot with him on this record, more so than in the past.”

“It’s an intimate thing to write [songs] with somebody, to reveal oneself like that. But I feel in¬credibly comfortable with him – there are no judgments. Pierre really contributed a lot to the lyrics of some of these songs. He could come up with just the right choice of words – simple but meaningful – to fit the story we were trying to tell.”

Sarah and Pierre worked quickly and efficiently at their respective home studios in Vancouver and Montreal, cutting all the basic tracks for six songs in just five days. “We were able to record ‘live on the floor,’ with myself and the musicians all right there in the room,” Sarah explains. “It was quick and exciting, and really a first for me to work that way.”

In addition to some familiar names from past McLachlan sessions, the supporting cast for Laws of Illusion includes the much–traveled drummer Matt Chamberlain, who’s played with everyone from Pearl Jam to John Mayer; and guitarist Colin Cripps, best known for his work with Canadian singer/songwriter Kathleen Edwards. Laws of Illusion will be available both as a standard 12–track compact disc and in a deluxe version including a five–song bonus DVD of live in-studio performances.

Coupled with the release of Laws of Illusion comes another landmark event in Sarah McLachlan’s career: her return to Lilith Fair, the all–female concert tour she founded in 1997 and where once again she’ll headline the main stage.

“Being a part of Lilith Fair was inspiring on so many levels,” says Sarah. “Besides discovering new music everyday and sharing the stage with an incredible array of talented women, it was wonderful to see established and new artists alike have the opportunity to play in front of much larger or more diverse audiences than usual.”

Between 1997 and 1999, Lilith Fair drew over two million fans and raised more than $7 million for charitable causes. Now, after an eleven–year hiatus, Lilith Fair is back. The 2010 edition commences June 27 in Calgary, Alberta with dates running through August 16 in Dallas, Texas. Beth Orton, Brandi Carlile, Carly Simon, Cat Power, the Go-Gos, Loretta Lynn, Jill Scott, and Mary J. Blige are just some of the artists who will join Sarah McLachlan for Lilith 2010.

“This summer,” Sarah promises, “is gonna be full on and fun.”

The Story So Far

Since her signing with Arista Records nearly two decades ago, every one of Sarah McLachlan’s studio and live albums has been certified gold, platinum, or multi-platinum by the RIAA. Touch (1988) and Solace (1991) were both gold sellers. Her 1994 breakthrough, the 3X-platinum Fumbling Towards Ecstasy, was followed by the digitally enhanced multimedia version of The Freedom Sessions (1995, gold).

“I remember being $400,000 in debt and thinking, halfway through that record (laughs), ‘Okay, the record company is going to send me home because I’m just costing them so much money.’

“But I toured for 22 months on Fumbling Towards Ecstasy, going back over and over to all these cities. And every time it would be, y’know, 100 people, then 300 people, then 600 people. It was just a gentle growing thing—it didn’t happen overnight, and I’m so grateful that it wasn’t this big overnight success.”

“Up until that point, I had managed to live my career rather quietly. I wasn’t in the tabloids—I still am not for the most part, thankfully. It was Lilith Fair that catapulted me into a different stratosphere as far as the media frenzy and public knowledge.

“And really, at the time, it seemed like ‘Okay, this feels right, I can manage this now’—whereas if that had happened six or seven years previous, I don’t think I would have been anywhere near ready. But because I was able to live my career quietly and have small successes and get used to things in that way, I think I was kind of ready for it.”

In September 2004, Sarah McLachlan released the socially charged video "World On Fire," directed by Sophie Muller. The video made what Jon Pareles, writing in the New York Times, called “a modestly brilliant gesture: it stacks up budget items for a typical clip against what the same $150,000 budget would buy as relief efforts—cattle, bicycles, housing, education, medicine…The contrast between show-business splurges and practical aid is startling.”

“World On Fire,” a Grammy nominee for Best Short Form Music Video, cost only $15 to make—the price of a Sony mini DV tape. The remainder of the $150,000 video budget was distributed among eleven charitable organizations around the world including CARE, Engineers Without Borders, Help The Aged, Warchild, and Heifer International.

Sarah McLachlan’s Afterglow tour opened March 12, 2005 in Wellington, New Zealand and continued with dates throughout Australia, Canada, and the US—including a May 24 concert at New York’s Madison Square Garden The tour concluded June 12, 2005 with a gala perform¬ance in Sarah’s hometown of Vancouver, BC.

In October 2006, Sarah released Wintersong, her first album of holiday-themed songs. Among the highlights of this twelve-song set: “Happy Xmas (War is Over)” by John Lennon & Yoko Ono, “Song For A Winter's Night” by Gordon Lightfoot, “River” by Joni Mitchell, and the all-time seasonal favorites “I'll Be Home For Christmas” and “Have Yourself A Merry Little Christmas.” Produced, engineered, and mixed by Pierre Marchand, the platinum-selling Wintersong reached No. 7 on the Billboard chart. The disc was nominated for both a Grammy Award (for Best Tradi¬tional Pop Vocal Album) and a Juno Award (for Pop Album of the Year).

Sarah’s many cover songs and collaborations formed the repertoire for Rarities, B-Sides and Other Stuff Volume 2, released April 29, 2008. The album includes her soulful interpretations of the pop classic “Unchained Melody” and Lennon/McCartney’s “Blackbird” (from the I Am Sam soundtrack), as well as powerful live renditions of her own compositions “Angel” and “Pills.”

On October 7, 2008, the artist celebrated the 20th anniversary of her multi-platinum record¬ing career with the release of Closer: The Best Of Sarah McLachlan. For her first career anthology, Closer Sarah personally selected thirteen classic tracks from her award-winning catalog and also included two newly recorded and previ¬ously unreleased songs, “You Want Me” and “Don't Give Up.” Closer entered the Billboard chart at No. 11, Sarah’s fifth album to reach the Billboard Top 15.

“I never have set goals, in the sense that I expected to be successful or get to a certain place. My idea of success has always been, does it feel right? Does it feel good to me? Do I enjoy doing it? And somehow miraculously, I’ve been able to follow that path and have a great success at it.

“So this whole career, the life that I have, the opportunities that I’ve been given—it all comes as unexpected. Every day I pinch myself, you know? I can’t believe all this has happened to me.”

• Sarah McLachlan has sold over 40 million recordings worldwide since her recording career began in 1988 with her debut album Touch. Five of her albums have reached the Billboard Top 15.

• Sarah has received a career total of 21 Juno Award nominations. She is an eight-time Juno Award winner (Canada) and a three-time Grammy

• The touring festival called Lilith Fair, founded by Sarah McLachlan, brought together two mil¬lion people over its three–year history (1997-1999) and raised more than $7 million for charities. Indigo Girls, Sheryl Crow, Nelly Furtado, Queen Latifah, Emmylou Harris, and Christina Aguilera were among the many artists who participated in Lilith Fair.

• Sarah has been profiled in cover stories for Rolling Stone, Time and Entertainment Weekly.

• In 1998, Sarah McLachlan received the Elizabeth Cady Stanton Visionary Award for advancing the careers of women in music. New York Governor George Pataki presented Sarah with the award on the 150th anniversary of the first women's rights convention in Seneca Falls, NY.

• In 2003, the singer founded the Sarah McLachlan Music Outreach Program for the purpose of providing free music education classes to inner city youths whose school music programs have been reduced or abolished by budget cuts.