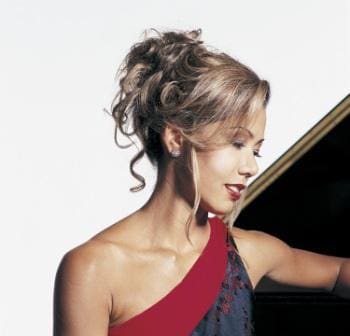 Pianist Naida Cole has been hailed as “a dazzling star” by Gramophone Magazine.

Naida is an exclusive Decca recording artist. Her first recording (of music by Fauré, Chabrier, Satie and Ravel) was released on Deutsche Grammophon, hailed by Gramophone Magazine as "a stunning debut" and listed in its Critics’ Favourite CDs of 2001. BBC Music Magazine called the disc "exceptionally accomplished” and awarded it five stars – the highest rating. Her 2nd CD, “Reflections”, includes Ravel's Miroirs, Bartok's Improvisations and Liszt's Sonata, and was released internationally to significant critical acclaim.

Naida has appeared frequently with the Toronto and Montreal Symphonies, and with orchestras worldwide, notably the London Sinfonietta, Munich Philharmonic, NHK (Tokyo), Copenhagen Philharmonic, Vancouver Symphony, San Diego Symphony and Royal Liverpool Philharmonic Orchestras. In recital she has performed at Wigmore Hall, the Kennedy Center, in South America and throughout Europe, Asia and North America. She has performed as guest artist at the chamber music festivals of Lockenhaus in Austria, Montpellier Festival in France, Ravinia, Spoleto, and La Jolla festivals in the USA, as well as the Lanaudière, Vancouver and Ottawa Chamber Music Festivals in Canada.

Naida has performed regularly with Gidon Kremer as a duo and also with his ensemble Kremerata Baltica across Europe and North America, including repeat dates at Carnegie Hall with Mr. Kremer. Naida also performs on the 2002 Grammy Award-winning Kremerata CD “After Mozart”.

Naida studied with Leon Fleisher and Robert Willoughby at the Peabody Conservatory of Johns Hopkins University, earning degrees on flute and piano, at the Fondazione lnternazionale per il pianoforte in Cadenabbia, Italy, and with Marc Durand at the Université de Montréal, where she completed her masters in music. At the Royal Conservatory of Music in Toronto she studied with Marina Geringas, graduating with an ARCT at age 13, then second youngest after Glenn Gould.