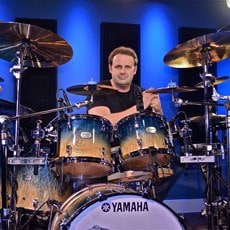 Mike Michalkow started playing drums at the age of 17, and was playing professionally by age 19. He completed the Music Program at Grant MacEwan University at the age of 23, then relocated to Vancouver, BC Canada where he currently resides. Mike's main gig these days is Studio Recording, Drum Clinics/Masterclasses, and teaching at his studio "The Drum Lab"

Mike Michalkow has been a member of the Yamaha drum team since 1999.