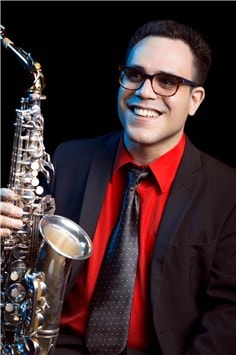 In 1993, Luis started his musical studies at the Escuela Vocacional de Arte Luis Casas Romero in his hometown of Camaguey, where he subsequently continued at the Escuela Profesional de Musica Jose White.

Luis later moved to the Cuban capital, where he graduated at the prestigious Escuela Nacional de Musica (ENA), the alma mater of several of Cuba's most prominent musicians. After graduating with high honors, he was awarded 1st place on the international jazz competition JOJAZZ, held in Havana (2003) and also kept a busy schedule, both teaching saxophone at the National School of Music and playing locally and touring internationally as well, Luis has performed and given workshops all over Cuba, Australia, Japan, USA, Canada, Bermuda, Spain, Germany, France, Belgium, England, Ireland, Scotland, Luxembourg and Switzerland.

One of the highlights of Luis’s career as an educator has been to be a part of Toronto’s most prestigious Humber College, where Luis has been a faculty member for over a year, as a private saxophone teacher and small and large ensemble instructor.

With an impressive career as a sideman and saxophonist, Luis keeps on working on his own development, in 2010 he was awarded a Canada Council for the Arts Grant to study with innovative saxophonist Greg Osby in New York City.

With all this achievements, Luis Deniz is definitely a name to look for in the future of jazz.