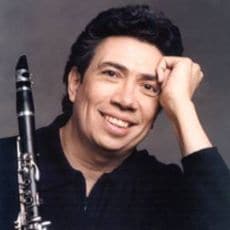 With a global reputation Joaquin Valdepenas is considered one of the most distinguished clarinetists of his generation. He has performed with orchestras internationally, including the English Chamber Orchestra with which he recorded the Mozart Clarinet Concerto to critical acclaim. He has made appearances with the Kalichstein-Laredo-Robinson Trio at the 92nd Street "Y" in New York as well as the Chamber Music Society of Lincoln Center. His European debut, a performance with the BBC Welsh Symphony, was broadcast on BBC Television. His Toronto recital debut, accompanied by Andrew Davis, was followed by his debut as soloist with the Toronto Symphony Orchestra.

Joaquin has numerous recordings on the CBC, Summit, Centrediscs and Sony Labels, and has been nominated for a Juno Award on four different occasions. His most recent releases are Contrasts, which includes the music of Bartok and Dohnanyi, and the Brahms Sonatas.

Heard extensively on radio and television across North America, Joaquin was featured in a PBS documentary about the Aspen Music Festival, highlighted as both conductor and clarinetist. Mr. Valdepenas is a founding member of the Juno award-winning chamber ensemble Amici and has collaborated with the American, Ying and Muir Quartets, as well as with members of the Cleveland, Vermeer, Guarnieri and Tokyo String Quartets. He often participates in chamber music festivals, including those of Aspen, Edinburgh, Marlboro and Banff, the Casals in Puerto Rico, Evian, New York's Mostly Mozart and the Norfolk, as well as the Nagano in Japan.

This season he appeared with the Winnipeg Symphony in recital and the Vancouver CBC Orchestra. Joaquin has been the conductor of the Toronto Youth Orchestra for 10 years. Mr. Valdepenas has conducted the Light Classics programs of the Toronto Symphony Orchestra and the Aspen Music Festival Wind Ensemble.

Mr. Valdepenas has collaborated with Yamaha's Hiroshi Nakijima in the design of a new line of clarinets, combining the French and German traditions in a unique voice.