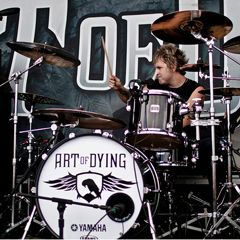 Jeff is the drummer behind the very successful and powerful Rock band "Art of Dying'. Jeff started playing drums at the age of 10 after 3 years of piano. Jeff started playing immediately in school with all clubs including the Jazz, Concert and Senior bands. At only 13, Jeff started playing in the club scene around the GTA along side bands like: DOA, SNFU, No Means No and many more. Jeff's first experience with Yamaha Drums was around this time when he acquired the almighty 'Yamaha Power V's. After realizing how truly great these Yamaha drums were, he made the jump and investment to the 'Yamaha Custom' family and hasn't looked back! For the next few years Jeff played with several bands in different genres including a weekly House Band in Guelph Ontario that was all 'Improv Funk'. This improv playing style was instrumental in creating a diversity that would later serve Jeff extremely well! Around this time he also began learning guitar to start writing his own material and write with other Artists. He continued his true passion playing drums with various Artists in the Toronto area until he moved to Vancouver in 2000.

Jeff wasn't in Vancouver 1 month before he was asked to join signed band 'Universal Freak'. This led to many other opportunities in both the live and studio scene. He continued to play as much as possible, networking and playing with several other successful Artists and Producers. It was becoming very evident to many people that Jeff's playing could not be ignored. His attention to detail, drum tone, timing and all-around versatility was making a lot of noise. In the last 10 years Jeff has recorded and worked with some of the best Engineers, Producers and Musicians in the biz such as: Howard Benson, Mike Fraser, Jonny K, Mike Plotnikoff and Dan Donegan to name a few. Today, Jeff continues to log many hours on Stage, in the Studio and in the Song Writers corner with Art of Dying'. Jeff joined AOD in 2007 and has recorded 3 records with the band including their most recent major label debut release 'Vices and Virtues'.

The band was signed by Warner/Reprise/Intoxication in 2010 LA after being discovered by Dan Donegan of 'Disturbed'. The album opens with Jeff's thunderous Drums on AOD's 1st single 'Die Trying'. Jeff's current kits are: Oak Custom in