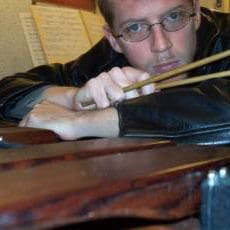 Canadian percussionist D'Arcy Philip Gray exploits his versatility to find himself in a great variety of performing situations.

In the fall of 2004, Gray worked as both solo percussionist and "analogue circuit master" for the "musiques a loft" series in Montreal, toured extensively with the Motion Ensemble, gave marimba masterclasses at the Conservatorium van Amsterdam, worked in the STEIM Electroacoustic Studios(Amsterdam), gave children's percussion workshops in Toronto and Columbus GA, and was an invited soloist at the Percussive Arts Society International Convention in Nashville, TN. During this time he gave first performances of nearly 20 pieces for solo percussion or chamber ensembles. Since 2004, Gray has been in demand as both a soloist and clinician, working in Canada, the United States, Europe, and South America.

In the past, Gray has taught percussion and music technology courses at McGill University, been a member of the Merce Cunningham Dance Company in New York, given recitals in Canada, the United States, Europe, and South America, performed with numerous orchestras (including the Montreal Symphony and the National Arts Centre Orchestra of Canada).

He has written a number of articles on percussion and electronic music, most recently for the Leonardo Music Journal.

Gray is a graduate of the Juilliard School and McGill University. He has received grants from the Canada Council for the Arts, the Conseil des arts et des lettres du Québec, and the Getty Research Institute for the Arts and Humanities.

D'Arcy Philip Gray is a Yamaha Clinician and a Sabian Artist. His collection of studies, "7 Operations for Marimba" are published by Honeyrock in the U.S.