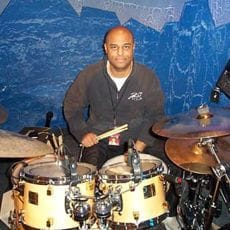 'Monstrous' player is how even his peers describe this soft spoken Toronto lad. Wilson is best known for his nightly role as the drummer in the old Open Mike Band? which had a long and successful run on CTV and the Comedy Network - but his skills have attracted many other gigs as well.

Here's a partial list of credits: Victor Wooten, Warren Zevon, Salome Bey, The Philosopher Kings, The Mighty Swallow, Marc Jordan, George Fox and tons of others. Wilson is playing Maple Custom Absolutes and his DTXtreme kit on both the Open Mike Show and his numerous live and studio gigs. Check out Wilson's website below for lots of cool things to see.