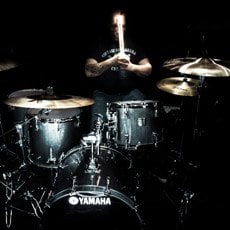 Jay Deachman is a first-call live and studio drummer based in Vancouver, Canada. He has played and toured with Theory Of A Deadman, Default, Copyright and Loverboy as well as playing on countless other tours and sessions. Jay began playing drums as a young child in Vancouver, turning pro at 15. After his first major label experience at 19, Jay decided to enhance his knowledge of drums and drumming by attending the prestigious Drummer's Collective school in NYC. Jay graduated in 1992 and after a brief time playing in Sweden and throughout Europe, returned to Vancouver. He has also studied privately with Jim Chapin, John Fisher, Dom Famularo and Matt Chamberlain among others.

Jay also loves a busy teaching schedule when not on the road. Jay has always been a "gear head" and likes tinkering with different products to get the best sounds- this has lead to both studio and live teaching with such producers as Rich Robinson (Black Crowes), Chad Kroeger (Nickelback), Greg Archilla, Don Gilmore and bands including Good Charlotte, Alice In Chains, Joe Bonamassa and Sarah Bareilles. Jay's songwriting has become more prominent recently with a featured song in the #1 movie "Diary Of A Wimpy Kid 2" that he produced and played all the instruments on as well as playing and writing work on upcoming releases from Cobra Ramone and Sadie Campbell among others. You can find out more about Jay Deachman and see a full credit list at www.jaydeachman.com